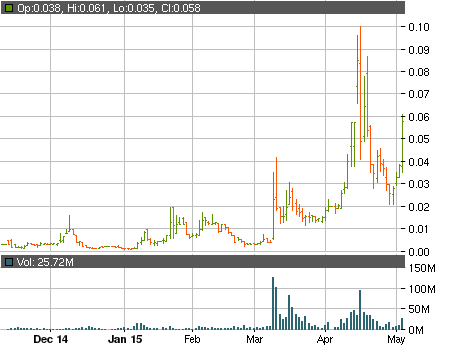 When the market opened yesterday it seemed that the stock of Propanc Health Group Corp (OTCMKTS:PPCH) is heading into a rather uneventful session. Indeed, for over half of the trading day the ticker remained relatively flat fluctuating around its previous closing price of $0.0382 on a subdued trade volume.

All that changed however when PPCH published a new PR article that put investors into a state of buying frenzy. Soaring upwards the ticker managed to add over 50% to its value during the last hours of the session reaching a close at $0.0578. With the massive number of shares traded during the surge the daily volume surpassed 25.7 million shares. So what was the announcement that caused all of this?

In the PR PPCH revealed the first set of results from its series of animal trials. The lead drug of the company, PRP, showed no adverse clinical signs at the maximum tolerated dose when administered by I.V. injection in mice. The results are encouraging but before you make a decision whether to invest in the company or not there are a couple of things that must be taken into consideration.

Pennystocks trying to develop new drugs or treatments almost always have notoriously bad fundamentals and PPCH is definitely not an exception. The latest quarterly report showed that at the end of December 31, 2014, the company had:

Equally as alarming is the rate at which the company has been issuing new shares. In our previous articles we warned you that between October 14, 2014, and February 16, 2015, the outstanding shares more than doubled growing from 82 million to over 191 million. A significant portion of the newly issued shares came into existence through the conversion of debt at discounted prices. On April 16 PPCH announced that they will be repaying several outstanding convertible notes that are due for conversion in May and June. While this decision is definitely a step in the right direction it was overshadowed by the fact that just 3 days earlier the company filed an 8-K form that details the numerous convertible notes issued by PPCH between January and March.

The hype generated by yesterday’s positive results may help the stock move towards its high posted in mid-April but the risks around the company remain as serious as ever. The reliance on convertible debt to fund their operations, the corresponding dilution and the fact that PPCH still have years of research and clinical trials ahead of them are enough quickly depress the price back down.