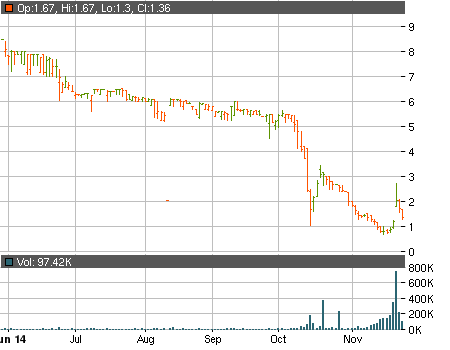 The pump that was pushing Ubiquity, Inc. (OTCBB:UBIQ) has run dry. On Tuesday the company’s upward movement came to a screeching halt, with UBIQ closing 17% down. The next session slammed the price another 20% in the red, with UBIQ losing a third of its newly inflated market cap in just two days.

The promotional campaign targeting UBIQ started on Nov 18, with a whole bunch of stock pumpers sending paid touts for the stock. Paying party Microcap Innovations LLC handed out varying sums of money to the promoters, with some bagging as much as $15 thousand for their efforts. You don’t have to be an expert to see how the pump affected the share price, with UBIQ bouncing off its six-month low after the emails were sent, on significantly heavier volume.

The company posted an underwhelming Q3 report on Nov 14 containing the following:

The numbers, combined with the free fall chart movement of UBIQ prior to the pump could have given investors a bit of an early warning of what was going to happen once the pump comes to an end. We have been following the movement of the stock since the onset of the promotion and warning investors of the risks associated with buying in on paid stock advertisements. The inevitable seems to have happened, with UBIQ 33% down over just two sessions after the hype-driven climb.

Considering the pump and its outcome, the announcements that UBIQ intends to uplist to the NASDAQ seem even more mystifying. The company also has the names of infamous Luis Carillo and Wade Huettel on its S-1 filing. Those same gentlemen were charged with orchestrating a pump-and-dump campaign by the SEC back in the spring of 2013. There’s plenty more space under UBIQ‘s feet and only the future will tell when the price will stop sliding.