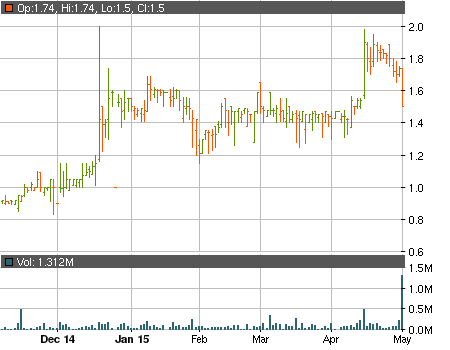 On Friday root9B Technologies, Inc. (OTCMKTS:RTNB) took a plunge and closed red in double digits. The price slipped over 13% to stop at $1.50 per share, after a record daily volume of 1.3 million RTNB shares changed hands.

The company is not among the most liquid on the OTC marketplace, trading an average of just under 100,000 shares daily for the past month. The previous time RTNB shifted a large daily volume was on April 15 when the price jumped 21% up and reached intra-day highs of $1.98.

Just like the April 15 spike in price and volume happened without any immediately obvious triggers, Friday’s session did not have an immediately obvious catalyst either. RTNB announced that its wholly owned subsidiary IPSA International has been chosen by St. Kitts and Nevis to “address recommendations” that aim to improve the Citizenship by Investment program run by the country. For those unfamiliar with it, St. Kitts and Nevis, or The Federation of Saint Christopher and Nevis, is a country consisting of two islands, located in the West Indies, which is also the smallest sovereign country in the Americas, with a population of about 55,000 people.

The company’s latest financial report is an annual covering 2014 and contains the following:

Revenues are about 20% down year-over-year. Net loss on the other hand, has ballooned nearly 300% from the $6 million in 2013. The company has got to the point where it’s generating seven-digit revenues but it still hasn’t made significant steps to turning profitable, logging loss from operations before additional expenses are factored in.

Another thing investors may want to keep in mind is that RTNB went from 32 million outstanding common shares in early November to 72 million shares in mid-March.