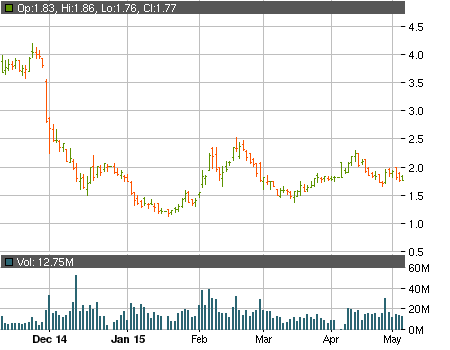 Following a few months of downright decline, the oil and gas industry is slowly getting back on its feet as the prices of the precious energy sources appear to be on the rebound. However, it is not a good time to run an E&P enterprise right now and the management of SandRidge Energy Inc. (NYSE:SD) know it very well. And the company’s most recent financials do little to prove otherwise.

Even though the 10-Q has yet to see the light of day, SandRidge published a summary of its Q1 2015 report after market closed yesterday. Prior to the release, SD had closed trade at $1.77, up less than once per cent from the day before. Albeit minor, the new quote was the result of more than 12.8 million shares changing hands that day, which is slightly below the daily average trading volume for the stock. The impact of the announcement seems much clearer today because SD shares are now traded around the $1.65 mark, down seven per cent from Wednesday. Considering that SD stock was traded at around $7.00 per share less than a year ago, the current quote provides few confidence-building prospects to investors.

The industry-specific risks typical to E&P companies relate to SandRidge, as well. The value of SD’s proven oil reserves is contingent upon the market price of the underlying crude oil and natural gas. The higher the price, the bigger the asset, which in turn provides wider access to financing opportunities. The bad news here is that it works both ways. Oil prices have dwindled substantially and so have SandRidge Energy’s assets. This explains the management’s decision to reduce the number of active rigs from 35 in Q4 2014 to 7 in 2015. Indeed, drilling new oil right now could only further reduce the potential for profits as oil may have lost a chunk of its market price, yet drilling costs have stayed the same at best.

The key to success in the forthcoming months, according to CEO James Bennett, lies in reducing costs to ensure higher operating efficiency. This includes focusing on multilateral wells with a proper IP rate. Whether the company will stick to its fiscal discipline plan for the remainder of the year remains to be seen. However, it could be a positive step on the road to SD’s mid-2014 levels.