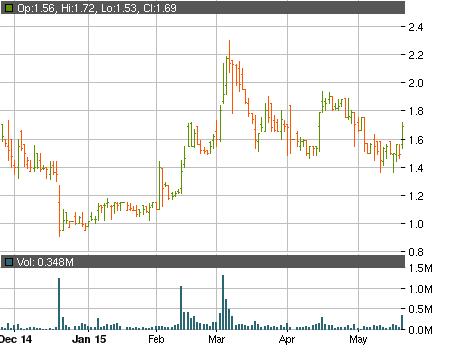 Yesterday Vista Partners LLC decided to reiterate that they have given the stock of Soligenix Inc (OTCBB:SNGX) a twelve-month price target of $7. Vista had given SNGX a price target of $5.5 per share but back in September 2014 they revised their target.

Although the PR contained no new information it did remind investors that SNGX is far from the typical pennystock and as a result interest in the stock spiked significantly. The traded volume for the session of 348 thousand shares was over 7 times higher than 48 thousand shares that changed hands on Wednesday. The enthusiastic buying pushed SNGX 13.4% higher to a close at $1.69 per share.

Another analyst research firm, Zakcs Small Cap Research, has also been covering Soligenix giving them a price target of $5.5 per share. As you can see for now that stock is still sitting pretty far away from either of the price targets but that doesn’t mean that SNGX haven’t been making progress with their clinical programs.

Back in April the company reached an agreement with the FDA for the design of a pivotal Phase III clinical study for the SGX203 in the treatment of pediatric Crohn’s disease. The trial is anticipated to begin in the second half of the year with primary data being available in the first quarter of 2017. In addition Phase 2 data from the SGX942 drug candidate for the treatment of Oral Mucositis is expected by the end of the fourth quarter of the year.

The financial state of the company further sets them apart from the majority of the pharmaceutical pennystocks. The quarterly report filed just days ago showed that at the end of March SNGX had:

The company believes that its current cash reserves will be enough to fund its operations through the next twelve months. It should also be noted that $5.1 million of the reported liabilities consist of warrant liability while $3 million of the quarterly net loss is due to change in fair value of warrant liability. Thanks to two contracts granted by the National Institute of Allergy and Infectious Diseases (NIAID) and one from the US Department of Health and Human Service’s Biomedical Advanced Research and Development Authority (BARDA) SNGX are able to report respectable revenues.

During the past couple of months the chart performance of the ticker has been quite volatile with the stock surging up the chart on several occasions just to fall back down in a prolonged series of corrections. That is why you should carefully plan your trades before putting any money on the line.