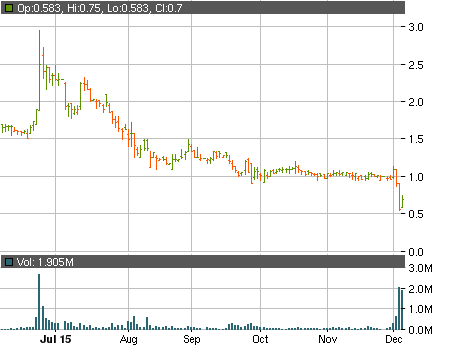 Last Wednesday the stock of Soligenix Inc (OTCBB:SNGX) suddenly crashed hard registering a loss of more than 17%. On the next day things got even worse – in a single session the company saw 38% of its value simply disappear. A new 52-week low of $0.55 was also registered during the trading day.

Some investors began speculating that the severe drop was a signal that SNGX might be announcing some troubling information from its clinical trials. On Friday, however, the company decided to alleviate those fears in a new PR issued early in the morning. Soligenix confirmed that for now everything is on track and preliminary results from their Phase 2 clinical trial of SGX942 for the treatment of oral mucositis in head and neck cancer patients should be reported by December 18. By the same date the Phase 3 clinical trial of SGX301 should open for enrollment. The PR definitely did its job and SNGX were able to bounce upwards by 25% closing the week at $0.70

The question remains though – what could have caused the sell-off? Dealing with biopharmaceutical pennystocks is always risky but Soligenix seem to be among the more encouraging ones. Their financial report for the third quarter of the year showed some impressive results:

Compared to the same period last year the reported revenues have increased by more than a million while the net loss for the nine-month period is down by nearly $3 million. According to the quarterly SNGX expect that between its cash reserves, government contracts and grant programs, as well as equity lines it will have sufficient capital to meet its needs for at least the next twelve months.

Before you get overly-enthusiastic though let’s draw your attention towards a couple of things. At the end of September SNGX had over 3 million warrants with an exercise price of just $0.61. Prior to last week SNGX was fluctuating around the $1 mark so the owners of the warrants might have been tempted to turn them into shares. Furthermore, as we warned you in our previous articles earlier this year the company entered into a securities purchase agreements under which it can sell up to $10 million of stock. The price of the shares sold as part of this agreement however features a 20% discount.

With several catalysts coming in the next couple of weeks SNGX could remain a highly traded stock. Before establishing your position in the ticker though you should still do your own due diligence.