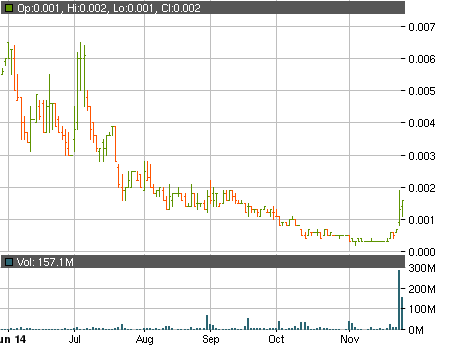 Right before the holiday the stock of StreamTrack, Inc. (OTCMKTS:STTK) was able to make another huge jump up the chart closing 23% in the green at $0.0016. Although the daily traded volume couldn’t quite reach the record number of 289 million shares posted on Tuesday it was still significant with investors shifting 157 million shares. So far during the three sessions since the start of the week the stock has appreciated by more than 266%. The chart performance during the last session was a bit shaky though so the question is can STTK keep the positive momentum going?

Around the closing bell on Monday the company issued their first press release in quite a while and judging by the market reaction during Tuesday’s trading the news definitely managed to lure investors in. The PR announced that STTK are ready to launch their RadioLoyalty mobile app for Android devices. With an overhauled design and new features the company hopes that the product will boost their revenue generation. An iOS app is also scheduled be released shortly.

STTK definitely needs to boost its financial results because the latest quarterly report is not particularly impressive. It covers the period ending May 31 and contains the following numbers:

In addition to the lackluster cash reserves, the massive working capital deficit of $3 million and the negative bottom line investors have to also worry about the crushing dilution that has been taking place.

In the meantime two 8-K forms have been filed and they showed a rather troubling picture. The first one, filed on October 7, showed that in just two months the outstanding shares had more than doubled and were now 266 million. No explanation was given for the exuberant issuance of shares but the next 8-K shed some light on the matter. It stated that as of November 19 there were nearly 385 million outstanding shares with the 118 million newly issued shares coming into existence through the conversion of notes. Looking through the quarterly report reveals that the majority of STTK’s outstanding convertible notes could be turned into common shares at a 45%-50% discount.

On Wednesday, again after the end of the session, Streamtrack announced that they have entered into an agreement with Staradio Corp to utilize the RadioLoyalty platform. Under the terms of the agreement 3 stations will stream their program through STTK’s product. So far the news has not been featured on the Yahoo Finance profile of the company and we will see if it will be enough to push the stock higher during today’s limited trading session.

The recent announcements could help the stock keep its current price gains but caution should be exercised. Do your own due diligence and take into account all of the red flags before making any decisions.