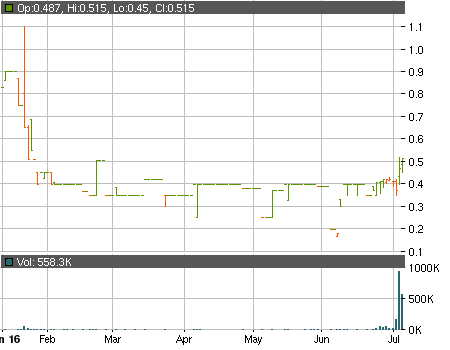 After surging by over 27% and closing at $0.47 per share on Wednesday the stock of Supernova Energy Inc (OTCMKTS:SPRN) climbed even higher during yesterday’s trading. The ticker suffered some volatility in the early portion of the session but managed to stabilize reaching a close above 50 cents at $0.515, representing a daily gain of 9.34%. After months upon months of being virtually unnoticed and seeing minimal trade volumes SPRN‘s recent performance may appear rather impressive.

The problem is that the sole reason for both the interest displayed by investors and the stock’s ascent is the paid pump carried out by the affiliates of Stellar Media Group. After the end of Tuesday’s session a round of 8 alert emails was sent out by Damn Good Penny Picks, Penny Picks, Penny Stock Newsletters, to name a few. Of course, the pumpers didn’t do it for free disclosing a $25 thousand compensation for their services. How long will the artificial hype created by the promotion manage to offset the red flags surrounding SPRN, though?

Especially when said red flags are both numerous and extremely serious. Let’s start with the OTC Pink Limited Information warning sign found on the OTCMarkets profile page of the company. It was put there as a result of SPRN failing to submit its latest financial reports. On March 31 the company filed a notification of late filing for its annual report for 2015 which gave them a 15-day extension but even now, close to three months later, there is still no sign of the report. At the same time the company also skipped on filing its quarterly report covering the first three months of 2016.

This means that investors are left to rely on financials that are now almost a year old – as of September 30, 2015, SPRN had:

The balance sheet is nothing short of atrocious but as we said earlier we don’t know what resources are available to the company at the moment. What we do know, however, is that a lot of the loans taken on by SPRN will have to be repaid this year.

Ultimately, it is up to you to decide whether SPRN is a sound choice for trading. Just be sure to use caution and to never put unaffordable sums of money on the line when dealing with a pennystock company.