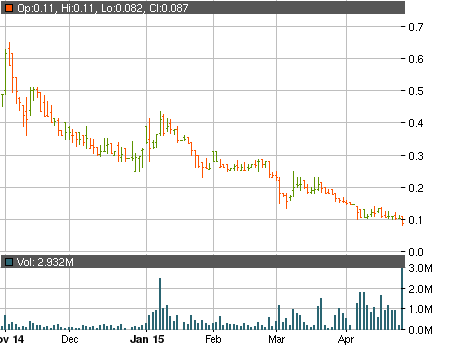 The new year has not been too kind to Surna, Inc. (OTCMKTS:SRNA). After it boasted highs of forty cents per share in early January, Surna has proceeded to drop like a stone with little interruption from that high perch. The company sank to a new 52-week low yesterday as massive selling pressed the price 15% down.

Surna shifted over 2.9 million shares in yesterday’s session – an all-time record for the company. Sadly, the other new thing was a 52-week low at $0.087 per share. The company’s chart standing took a further blow as Zynga superstar CEO Tom Bollich left the company in February. That’s not to say that Bollich comprised the entirety of factors that drew investors into SRNA but leaving the company just as things were allegedly starting to look up for the business did not really inspire confidence either.

Surna’s latest financial report sits in the company’s 10-K for fiscal 2014 and contains the following:

The latest 8-K from SRNA informs of the appointment of Mr. Tae Darnell as the company’s principle executive officer and president, replacing Bollich until the board of directors elects person to permanently fill the CEO spot.

On the upside, SRNA at least has not been diluting too much. The company went from 104 million shares in November to 119 million in early April.

Thankfully, at least the promotional pump mails targeting SRNA have come to a halt. The last of those came through on March 20. Within the 30 days that followed, SRNA‘s stock price has dropped about 55%. Only time will tell whether the stock has found a bottom at this level.