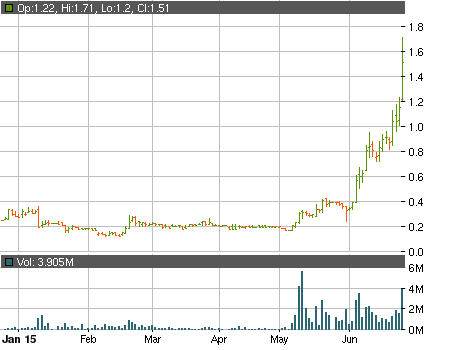 There is no stopping TapImmune Inc. (OTCMKTS:TPIV) it seems. After the company put up a new press release related to its Phase I trials and that pushed the price to a cozy close 31% in the green. TPIV shifted its largest volume for the past month and stopped at $1.51 by the closing bell.

The company announced that Phase I patient data was analyzed in full and the results were encouraging. The trials involved women who had already gone the standard surgical and chemotherapy treatment. Those were then treated with a “multi-peptide HER2/neu vaccine”. After six months of revaccination there were 19 out of 20 patients who displayed a “robust” immune response and T-cell immunity, brought about by the vaccine.

The news is significant, obviously significant enough to get people in a rush to buy TPIV stock all the way up to an intra-day high of $1.71 per share. Within the space of less than two months the company surged from a modest $0.20 per share to those new highs. This is no small feat, especially considering this happened without any major pullbacks. TPIV has been heavily overbought for more than two weeks now but it seems the level of excitement surrounding the new funding received through the exercise of warrants and the positive news from the Phase I tests are enough to hold the line.

TPIV‘s previous announcement was that its biggest institutional investor, Eastern Capital Limited, exercised 5 million warrants and got as many common shares, priced at $0.50 resulting in proceeds of $2.5 million. The company stated the funds would go towards the commencement of Phase II trials.

The company has gone from 19.6 million outstanding common shares in November 2014 to 38.6 million shares after this last warrant cash infusion. There is also a considerable amount of outstanding warrants that could lead to the further issuance of rather a lot of new shares.