The Pump For COASTAL INTGRTD SVCS (OTCMKTS:COLV) Starts To Hesitate 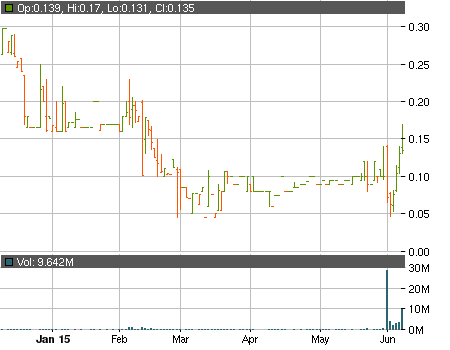 After making a remarkable recovery by registering three consecutive sessions of massive gains many expected COASTAL INTGRTD SVCS (OTCMKTS:COLV) to continue with their impressive performance during yesterday’s trading. StockTips also did their part and early in the morning issued another email alert hyping up the stock.

Unfortunately the performance of the ticker turned out to be far less encouraging. In the early hours of the session as a result of the artificial hype created by the pump COLV did see some intense trading with the majority of the 9.6 million volume being registered during that period. The buying pressure pushed the stock up from its opening price of $0.139 to a high of $0.17 but exactly like last Monday’s trading the momentum disappeared and the stock quickly dropped down. At least this time instead of crashing by 28% COLV ended the session 3% in the green at $0.135.

Still, the company did close below the opening price which could signal that its current price ranges are somewhat unstable. Well, if you take a look at the latest financial results reported by COLV you will see that a share price of $0.135 is actually extremely over-inflated. At the end of March the company had:

So how realistic do you think is the current market cap of $47.5 million?

The only reason for the current excitement around COLV is the fact that on May 31 the pump outfit StockTips announced the company as their next pump. The disclosed budget for the promotion is $4.5 million. StockTips have been the most influential pumper for quite a while but their last campaigns have been quite discouraging.

Back in March StockTips pushed Teluplay International Inc (OTCMKTS:TLPY) to a high of over $0.26 but on just the second day of pumping the stock began crashing towards the bottom of the chart. By now the company has wiped more than 97% of their value and is trading at $0.006 on minimal volumes. Believe it or not, one of the previous StockTips pumps had an even more disastrous end – the Securities and Exchange Commission actually intervened and suspended the stock of Pingify International Inc (OTCMKTS:PGFY).

It should be obvious that without the help of the pump COLV will find it nearly impossible to sustain the current price. The risks around the stock get even bigger however when you take into account the 52 million shares priced at just $0.001 each that were issued last year as a conversion of debt. Thanks to the interest in the company created by the pump the owners of these shares could reap millions in profits if they unleash them on the open market.

It may be for the best to regard COLV solely as a pump play. Do your own due diligence and set appropriate time horizons for your trades because even a slight miscalculation could have dire consequences.