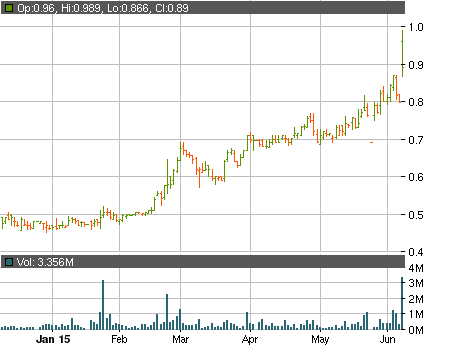 Yesterday Titan Pharmaceuticals, Inc. (OTCMKTS:TTNP) issued a rather encouraging PR. The company revealed that their Phase 3 clinical study of Probuphine for Opioid addiction met the pre-specified primary endpoint of non-inferiority in addition to all the secondary efficacy endpoints. With the positive results now officially disclosed a New Drug Application for Probuphine will be submitted to the FDA during the second half of the year. Upon successful approval the drug will be commercially launched next year.

The PR was bound to draw the attention of the market and investors were indeed eager to rush towards the stock. TTNP opened yesterday’s session with a massive gap at $0.96 while the high of the day stood at $0.989. The 3.37 million shares that changed hands throughout the session were nearly 10 times higher than the 30-day average volume of 389 thousand shares. Although the session had such an explosive start the stock did lose a significant portion of its momentum and by the time of the closing bell it had moved down to $0.89. Still, a gain of more than 11% is more than impressive.

Even before yesterday’s news TTNP was at the forefront of the biopharmaceutical pennystocks with a solid balance sheet. At the end of the first quarter the company reported:

It should be noted that the majority of the net loss was incurred through a non-cash losses on change in the fair value of warrants. If TTNP’s cash burn remains the same the cash reserves are estimated to keep the company funded through the fourth quarter of 2016.

Investors should take their time and do a bit of research though. With 110 million outstanding shares out of the 125 million authorized TTNP don’t have enough space to issue all of the shares underlying their outstanding warrants if all of them get exercised. That is why a vote will be held on either an increase of the authorized amount or a reverse stock split during the shareholder meeting scheduled for August 31.

The stock did close below its opening price yesterday but the positive topline results from the Phase 3 study could keep the excitement going. Still, using caution is always for the best when putting your hard-earned money on the line.