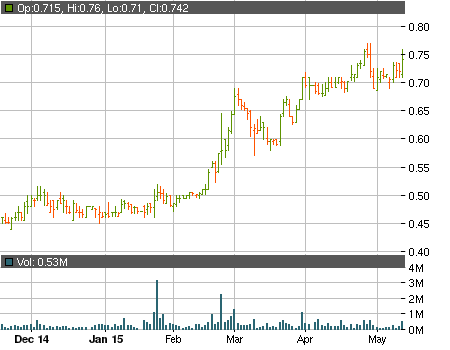 Minutes after the opening bell rang signaling the start of yesterday’s trading the stock of Titan Pharmaceuticals, Inc (OTCMKTS:TTNP) slid down in to the red to a low of $0.71 per share. The ticker was not only able to recover though but it finished the session with a gain of 3% at $0.742. For now the stock is still sitting relatively close to its 8-month high of $0.769 that was registered a couple of weeks ago. The 52-week high stands at $0.865.

Yesterday TTNP filed their financial report for the first quarter of 2015 and it contained the following numbers:

In our articles we have often stated that TTNP is in a far better position than the majority of the other biopharmaceutical pennystocks. The company expects its cash reserves to be sufficient to carry them through the fourth quarter of 2016. It should be noted that the drastic increase in the net loss when compared to $1.1 million in net loss reported for the same period last year was due primarily to non-cash losses on changes in the fair value of warrants amounting to $3.3 million.

The lead drug of the company, Probuphine, should be at the end of a Phase III clinical trial and results are expected to be announced by the end of next month. After that a New Drug Application should be submitted with the FDA by the end of the year with a potential commercialization of the product in 2016.

It is true that TTNP lacks a lot of the typical issues associated with pennystocks but investors still need to take a couple of things into consideration before making a decision. As of April 7 the company had 110 million outstanding shares out of the 125 million authorized. The problem is that there isn’t enough room to accommodate all of the shares that could potentially be issued if all of TTNP’s outstanding warrants are exercised. A shareholder meeting to vote on either an increase of the authorized shares or a reverse stock split was initially scheduled to take place before March 31 but the date was amended to August 31.

Today at 1 p.m. EDT a conference call will be hosted by the company. If the information disclosed during the call will be enough to push TTNP’s stock even higher up the chart remains to be seen.