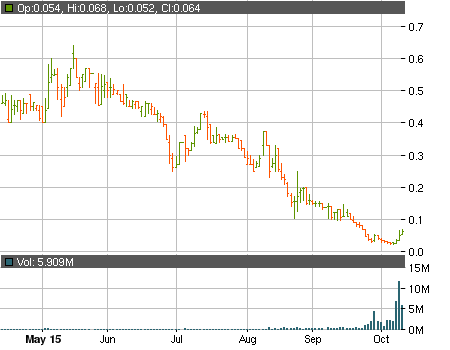 Last Thursday Vape Holdings Inc (OTCMKTS:VAPE) issued a corporate update and it seems that this was enough to put investors into a state of buying frenzy – since then the stock has been soaring up the chart registering three consecutive sessions of massive gains. After closing exactly 27% in the green yesterday currently VAPE are sitting at $0.063 per share. Despite the rather impressive performance the ticker is still down by 81% when compared to its August highs while at the start of the year the stock was trading at above 90 cents per share. Can the current hype help the company recover even more of its losses?

VAPE did announce several new products that should come before the end of the year. According to the PR they also streamlined their business and dramatically reduced their monthly personnel compensation expenditures. These are all steps in the right direction but investors shouldn’t ignore the numerous red flags surrounding the company.

The financial results reported by VAPE for the second quarter of the year were far from encouraging:

A huge portion of the current liabilities, over $1 million, consisted of convertible notes payable. Add to them the two notes totaling $622 thousand that were sold in August and the amount of VAPE‘s convertible debt gets even scarier. As a conversion of just $226 thousand more than 5.1 million shares had to be issued. This caused the outstanding shares to grow by nearly 40% and currently VAPE have 18.3 million outstanding shares. Some investors are speculating that even more shares may have been issued and they may be right – last Friday over 12.7 million of VAPE‘s shares, or almost 70% of the entire O/S, changed hands in a single session.

According to the Schedule 13G filed on September 29 9.9% of the then outstanding shares were owned by Mr. John M. Fife. A few years back Mr. Fife was the target of a SEC complaint alleging a “fraudulent scheme to purchase variable annuity contracts” and engage in “market timing”.

Getting too excited is never a good idea when dealing with any of the pennystocks out there. Take into account all of the various risks and decide on appropriate time horizons before committing to any trades.