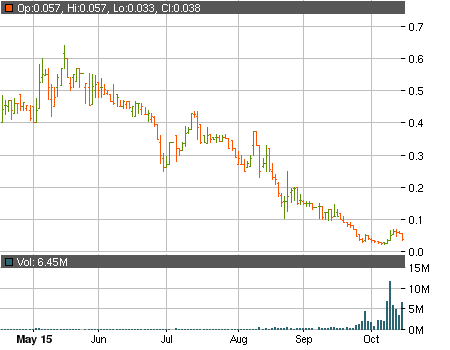 Vape Holdings Inc (OTCMKTS:VAPE)’s corporate update published on October 8 caused investors to rush towards the company in a state of buying frenzy. The pressure was so high that in the span of just three sessions VAPE moved from an opening price of $0.025 to a closing at $0.0635. Unfortunately all those who were eager to buy into the stock may now be regretting their decision.

In our articles we warned you that despite the encouraging developments around the company VAPE remains an extremely dangerous choice. The company finished the second quarter of the year with:

Out of the reported liabilities over $1 million were convertible notes. Furthermore, in August VAPE sold two new notes totaling $620 thousand. In the world of pennystocks this usually means only one thing – a rampant issuance of discounted shares and a massive dilution of the common stock. Indeed, between August 11 and September 29 the outstanding shares of the company ballooned by more than 40% and from 11.9 million had now reached 18.3 million shares.

On October 14, however, a new 8-K form was filed by VAPE and it had a disastrous effect on the stock. According to the filing during the first 13 days of October a total of 10.6 million fresh shares have been printed through the conversion of debt and now VAPE have nearly 29.5 million outstanding shares. As a result of this new information during yesterday’s trading the stock got simply devastated wiping close to 34% of its value and closing at $0.037. Will the stock manage to bounce?

It is up to you to decide but keep in mind that the average price of the shares issued just this month stands at about 0.0126, or nearly three times lower than the current market price.