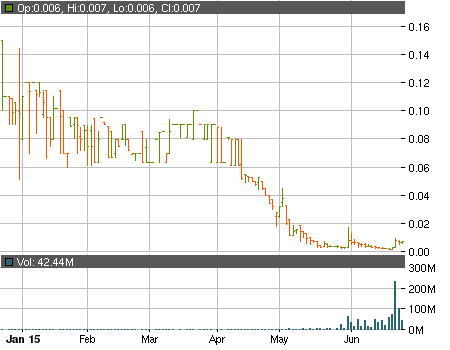 The stock of Arrayit Corp (OTCMKTS:ARYC) avoided registering a second session in the red when it managed to close yesterday’s trading 7.59% in the green at $0.0068. Although for now the ticker is hanging on to the majority of its gains from last week yesterday’s performance showed a lot of hesitation.

Arrayit’s volatility should not be underestimated. The stock is sitting deep into the double-zero price ranges and sharp movements in either direction are definitely possible. The problem is that last week’s surge up the chart was mostly facilitated through overly-positive messages posted on social media outlets and investor message boards. The company itself is simply surrounded by red flags.

For the quarter ending March 31 ARYC reported the following results:

The $7.1 million working capital deficit and the alarming net loss are already bad enough but investors have to take into account another huge problem – the potential dilution of the common stock.

As of May 29 ARYC reported 64.3 million outstanding shares. Last Thursday however the daily volume surpassed 232 million shares. This could mean that the outstanding shares have grown by nearly four times in the span of three weeks the effect on the share price could be devastating. At the end of March ARYC had $1.2 million in notes payable. $470 thousand of these notes could be turned into commons shares at a discount ranging from 30% to 40%.

The lackluster financials and the possibility of millions upon millions of discounted shares being unleashed on the open market make ARYC an extremely risky stock. Use caution and make search to do your own research before putting any money on the line.