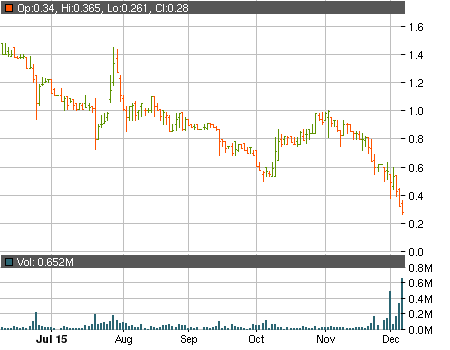 For the past month or so the chart performance of CannaVEST Corp (OTCMKTS:CANV) has been nothing short of a total disaster. At the start of November their stock was sitting just below the $1 per share mark while now it has fallen below 30 cents. The downtrend seems be getting stronger and stronger with the last couple of sessions seeing CANV wipe huge chunks of its value – a 18.87% loss last Thursday followed by an even scarier 25.58% crash on Friday.

For most of yesterday’s trading it appeared that CANV might be finally reversing their direction. The company was sitting comfortably in the green fluctuating around 35 cents per share but in the final hours of the session they once more began tumbling for the bottom of the chart. As a result CANV closed at $0.28 for a loss of 12.5%. A new 52-week low of $0.261 was also registered during the session.

In short, it took CANV just 5 weeks to drop by 72%. Is there a chance for a recovery? Well, the company’s latest financial report is actually not that bad. CANV finished the quarter ended September 30 with:

At the end of the period the company had cash reserves of over a million and amount of assets rarely seen in the world of pennystocks. Furthermore they generated revenues of more than $4 million, which is definitely an impressive feat.

Here come the problems though. $2 million of the revenues were achieved through a sale to a single customer – another pennystock company called Medical Marijuana Inc (OTCMKTS:MJNA). Investors should keep in mind that earlier this year CANV, MJNA and certain related parties of MJNA entered into a settlement agreement under the terms of which CANV received a settlement payment of $750 thousand.

So far nothing could really explain the company’s sharp decline in share price. Taking a look at page 14 of the quarterly report, however, reveals that on May 19 CANV entered into a securities purchase agreement under which they are going to receive up to $6.5 million deliverable in several tranches. Between the closing date of the agreement and October 1 four tranches totaling more than $2 million we completed. In exchange for the money CANV has issued convertible notes in the same amount that could be converted into shares at a 40% discount.

If some of the notes are indeed being converted and as a result a vast amount of underpriced shares are finding their way to the open market CANV could find forming a more prolonged recovery to be extremely difficult.