Will VAPE HOLDINGS INC (OTCMKTS:VAPE)’s Dilution Come To An End? 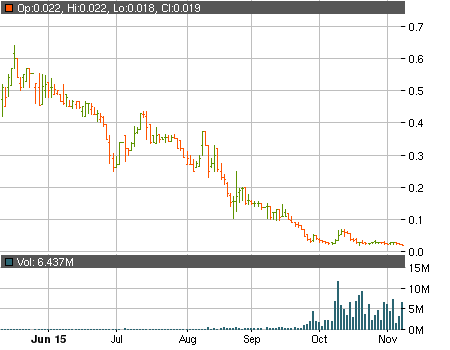 The shareholders of Vape Holdings Inc (OTCMKTS:VAPE) are still being put through a tremendous amount of dilution. The rampant issuance of shares simply devastated the stock of the company, something that can be clearly seen on the chart of the company. Despite depreciating severely in the past couple of months VAPE continues to sink to new record lows. During yesterday’s trading the ticker wiped 15.5% of its value finishing the session at $0.019. During the trading day VAPE registered their new 52-week low of $0.0175.

Back in June the stock was trading at more than 40 cents per share and if you bought in back then you might currently be facing losses of more than 95%. As we said the reason for the disastrous performance has been the issuance of discounted shares through the conversion of debt. VAPE has been submitting 8-K forms detailing the issuance of shares rather regularly and if you want a more detailed picture you can scroll through them. For now let’s just say that as of August 14 there were approximately 12 million outstanding shares while as of October 13 that amount had already surpassed 29 million. By the end of last month VAPE had 53 million outstanding shares.

As a whole approximately $561 thousand in debt has been converted. Although the amount is more than significant the dilution could continue to go for quite a while. At the end of June VAPE had $1 million in convertible notes with two more notes totaling $622 thousand sold in August.

The results from VAPE‘s operations are not exactly confidence boosting either. The quarterly report for the period ended June 30 revealed the following numbers:

In a corporate update from October VAPE stated that several new products should become ready in the coming months. It remains to be seen if the upcoming announcements will be enough to get investors excited. For now though the constant dilution could continue to determine the course of the stock.