Are Investors Returning to Virtus Oil and Gas Corp (OTCBB:VOIL)? 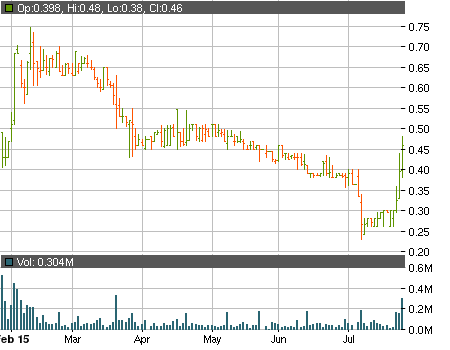 Last year the stock of Virtus Oil and Gas Corp (OTCBB:VOIL) became the target of of the most massive and widespread pump campaigns. The stock was being touted through two landing pages, email alerts were flying around and even a hard mailer brochure was put into circulation. Some people even received unsolicited phone calls. The artificial hype was so strong that it pushed VOIL to the unrealistic high of more than $2.2 per share.

In our articles, however, we warned you that such price ranges could not be sustained for long and those who used caution might have been able to save themselves from a total disaster – in the aftermath of the promotion VOIL not only wiped all of its pump-induced gains but it continued to go even lower down the chart. On July 7 the stock hit a new 52-week low of $0.23 per share which is close to 90% below the pump high.

Despite the atrocious chart performance it seems that some investors have not given up on the stock and for the past four sessions VOIL has been climbing up the chart moving from an opening price of $0.28 on July 21 to a close at $0.46 on July 24. Is there a reason for the sudden recovery though?

Well, no, there is nothing immediately obvious. The company is still in a terrible financial state finishing the quarter ending May 31 with:

VOIL did manage to secure some fresh funds through a securities purchase agreement under the terms of which they will sell a total of $1,150,000 of senior convertible notes in several tranches. Even with this capital injection VOIL simply cannot justify their current market cap of more than $24 million. Not to mention that the notes can turned into common shares at the lesser of 65% from the average of the lowest volume weighted average prices during the twelve consecutive trading days including the conversion date or $0.75 per share.

What could be causing the recent resurgence of the stock is more than likely found in the latest amendment of VOIL’s agreement with TJBB for the oil and gas property in Iron County, Utah. According to the new terms of the deal VOIL will have to drill a 7,000-foot initial test well. If the company fails to complete the test well by July 31,this year, it will forfeit its interests in the leases. Back in May VOIL signed a contract with Energy Drilling LLC to drill the Virtus Lone Pine 34-11-5 Well. With only a couple of days left before the deadline investors might be jumping in in anticipation of some news about VOIL’s progress.

However, how long is the excitement going to last? Even if the initial well is indeed completed it will change very little – VOIL will remain surrounded by red flags. The depressing financials, the massive amount of convertible notes that could be turned into commons shares at a discount to the market price and the extremely over-inflated market cap could easily depress the stock back down the chart. That is why any trades involving the ticker should be preceded by doing your own due diligence.