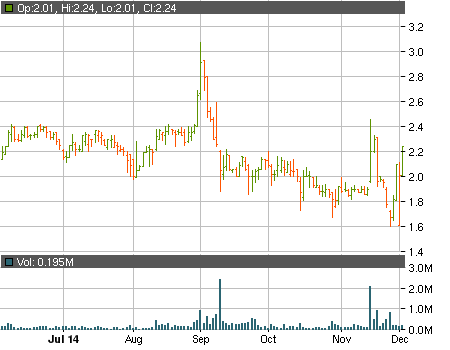 Yesterday the stock of ImageWare Systems, Inc. (OTCMKTS:IWSY) opened at $2.01, the same price it had at the end of Monday’s trading, but quickly jumped a bit higher to $2.05. The ticker stayed at that price for almost the entire session but less than an hour before the closing bell it suddenly began moving again. The stock shot up through the chart and reached it highest point for the day of $2.24 right when the trading day ended for a gain of nearly 11.5%.

With this latest price gain IWSY have almost recovered from the devastating slide they experienced just a week ago when they dropped to a new six-month low. The problem is that the current prices may be a bit disconnected form the underlying fundamentals of the company – at the moment IWSY‘s market cap stands at $200 million while their financial results at the end of September were:

In almost all aspects the balance sheet shows signs of deterioration. At the start of the year the company had over $2.2 million in cash reserves but now they can rely on less than half a million. The negative working capital has reached $1.6 million while the accumulated deficit has surpassed $134 million. Compared to the same quarter last year revenues slumped by 89% but the decline is primarily due to the one-time contract totaling $1.5 million signed in the third quarter of 2013.

On November 18 IWSY were able to increase their primary line of credit from $3 million to $5 million which should help them fund their operations for now. They were also able to extend the maturity date of the credit through March 2017. $2 million of the outstanding balance of the credit can be turned into common stock at a conversion price of $2.30, which is above the current market price.

Investors are still excited about the potential of IWSY’s products but the company will need to show concrete results. Many of the announced partnerships in the past have experienced significant delays or are simply never mentioned again. In the recent conference call the CEO stated that due to the size of their business partners some of the product launches could be postponed by a quarter or two.

If this is indeed the case IWSY‘s fundamentals might continue to decline and more and more investors might lose patience. Still, if things run smoothly with the TransUnion partnership and the FUJITSU Market Place integration ImageWare might be able to keep their stock from dropping to lower price ranges.