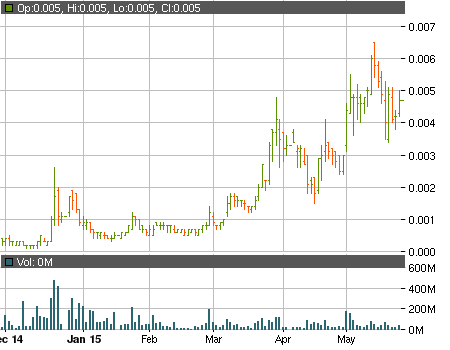 Right before the weekend the stock of Advanced Medical Isotope Corp. (OTCMKTS:ADMD) made a sizable jump up the chart adding nearly 12% to its value and closing at $0.0047. Although the daily volume of 35 million shares was larger than the one registered on Thursday it remained below the 30-day average for the company of 49 million shares.

As a whole the performance of the stock since the start of the year has been quite positive. In mid-January ADMD were actually sitting deep into the triple-zero price ranges going as low as $0.0004 while as of Friday’s session the ticker is trading over 1000% higher. Such a massive appreciation may seem quite surprising if you take into consideration the absolutely horrendous financial state of the company.

According to the financial report covering the first quarter of 2015 at the end of March ADMD had:

The balance sheet may be sufficiently depressing even on its own but investors have a lot more to worry about – in our previous articles we warned you that the long-term shareholders of the company have had to suffer through a crushing amount of dilution. At the end of 2013 ADMD had less than 121 million outstanding shares. Thanks to the massive amount of convertible debt ADMD had to take on in order to sustain their operations the outstanding shares ballooned to over 1.7 BILLION in just 12 months. 1.2 billion of the shares issued in 2014 came into existence as a conversion of debt.

With the start of 2015 the situation has remained the same with more shares being printed at discounted prices – as of May 11 the company had reached 1.97 billion outstanding shares out of the 2 billion authorized.

As the two PRs issued late in April indicated though the company is trying to improve its capital structure. ADMD reached an agreement with its primary lender under which $5 million of long-term debt will be converted into a new series of preferred convertible shares. Another $1 million will be exchanged for a new non-convertible 6% note. In addition ADMD announced that they have eliminated $500 thousand seasoned trade payables. The second PR also brought encouraging news revealing that back in November and December of 2014 an excess of shares had been issued and now the company will seek to remedy the situation and if they are successful it could further reduce their liabilities.

Will this be enough though? ADMD‘s cash reserves are next to non-existent while the quarterly report states that for the next twelve months the company will need around $1.5 million to fund its current operations. Another $5 to $10 million will be required if ADMD’s Y-90 RadioGel device gets approved by the FDA and moves towards commercialization. If the company continues to rely on the same external sources of funds the dilution may not be coming to an end any time soon.