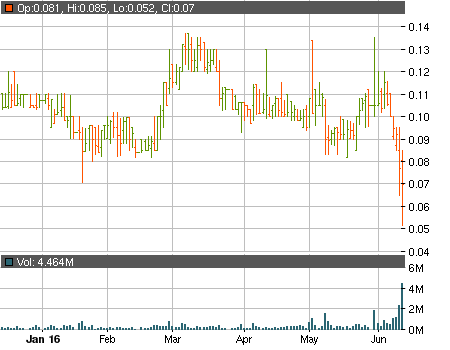 The depressing performance of BTCS Inc (OTCMKTS:BTCS)’s stock continued during yesterday’s trading. In our previous article we informed you that during Friday’s trading the ticker registered a new 52-week low of $0.065 but that is no more – yesterday the stock dropped to an intraday low of $0.054. BTCS were able to bounce off of these prices but they still closed the day with a loss of more than 9% at $0.07 per share.

The picture gets even more depressing when you take into account the fact that the crash took place on a trade volume of nearly 4.5 million shares. The last time BTCS saw comparable volumes was way back at the start of 2015.

Getting excited about BTCS has definitely been very hard for the past couple of months. First, at the start of May came the news that a temporary liquidator had been appointed for Spondoolies by the district court in Beersheva, Israel. BTCS had a lot riding on the merger with Spondoolies with the CEO and COO of the company even escrowing 12 million shares that will be returned for cancellation if the merger is not successfully completed by the end of year. Another 12 million shares will be cancelled if BTCS doesn’t uplist to either the Nasdaq or the NYSE again by the end of the year. At the moment it appears that both will be nearly impossible.

On May 16 BTCS submitted their report for the first quarter of the year and it showed that the financial state of the company was far from confidence-inspiring:

The last piece of news that made the negative sentiment towards the company even stronger can be found in the June 10 8-K filing. According to it due to BTCS accepting a new warrant exercise agreement several new obligations arose for the company. Apparently now BTCS will have to issue 37.8 million shares while also lowering the exercise price of warrants for the purchase of 10.2 million shares and 17.5 million shares to $0.055 and $0.069, respectively. In addition the conversion price of the outstanding junior and senior convertible notes was also lowered to $0.055.

After depreciating so much in such short amount of time BTCS could very well bounce back up but forming a more prolonged recovery may be rather difficult due to the severe red flags hanging around the company. Any trades involving the ticker must be preceded by extensive research and careful planning.