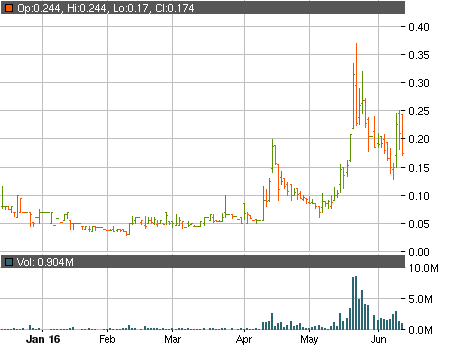 On June 9 the stock of Innovus Pharmaceuticals Inc (OTCMKTS:INNV) soared by more than 50% but it seems that this was nothing more than a one-day bounce – for the past two sessions the ticker has been rapidly wiping its gains. Yesterday it crashed by 17% and dropped down to a close at $0.17 per share. It should be noted that the itnerest towards the company is also going down with yesterday’s daily volume of 900 thousand shares being less than half of the monthly average of 2.2 million shares.

INNV has been publishing new PRs almost daily – since the start of the month there have been 5 new press releases, but it appears that they more often than not have no effect on the negative sentiment displayed by the market. In fact, yesterday INNV actually announced positive top line results from its RecalMax U.S. clinical trial. According to the PR the product is expected to be launched in the third quarter of the year. Despite the encouraging news, as we said earlier, the stock of the company suffered a serious crash during the trading day.

INNV may be in a better shape than many of the other pennystock companies but there are still some rather serious red flags that could explain the stock’s performance. Let’s start with the recently filed quarterly report covering the first three months of the year. Although INNV reported a 15% increase in their revenues and a significant reduction of the net loss per share the balance sheet as a whole still leaves a lot to be desired. At the end of March 2016 INNV had:

During the quarter the company initiated discussions with the NYSE for its planned uplisting but the quarterly report clearly shows that meeting the strict requirements of the national exchange may prove to be extremely difficult.

Not to mention that INNV‘s stock could find itself under tremendous downwards pressure due to the millions of underpriced shares being issued by the company. According to the subsequent events section of the report on April 18 INNV reduced the exercise price of some of its warrants to $0.07 and $0.0565 per share and issued 3.2 million shares upon exercise of such warrants. The company also has six convertible notes totalling $1.32 million that can be converted into shares at $0.15 per share, which is still below the current market price of the stock.

Investors should keep in mind that the company could be able to reverse the direction of its stock. The Q1 report didn’t include any revenues from Beyond Human, who INNV acquired earlier this year, while between July and September the company expects the FDA to announce its decision on the ANDA application for INNV‘s FlutiCare product.

Trading pennystocks carries significant risks and INNV is not an exception. Before committing to anything you should take the necessary time to do your own due diligence.