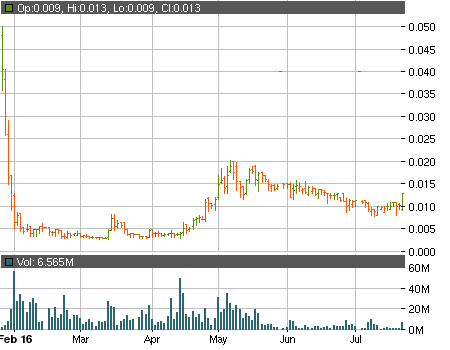 Cardinal Resources Inc (OTCMKTS:CDNL) managed to make a very decent upward run that started in the middle of April and continued until the first couple of sessions of May. Unfortunately, the ticker has been slowly sliding down the charts since then and dropped below the 10 cent per share mark earlier this month.

This turn of events isn’t very surprising considering all the red flags surrounding CDNL. Speaking of that, we can’t go past the red stop sign marking the company as OTC Pink Limited Information due to the fact that CDNL’s latest financial filing concerns the quarterly period ended September 30, 2015.

The report in question is so old that its contents are not that relevant, but it would be good to know that CDNL’s financial situation back then was quite grim. Things have changed since then and we are informed that the company has managed to acquire funds in order to keep its operations going.

OTC Marketplace tradition would suggest that CDNL got its hands on funds via means of toxic debt, which is the usual practice, but the company hasn’t been very detailed in its filings. Despite this and the lack of any new press releases in the past two months we saw the ticker surge 27.45% up the charts and close Friday’s session with a price of $0.013 per share.

Still, CDNL is more than hesitant in today’s trading and is already 8% down. In any case, you should be sure as much due diligence as you can and weigh out the risks before putting any money on the line.