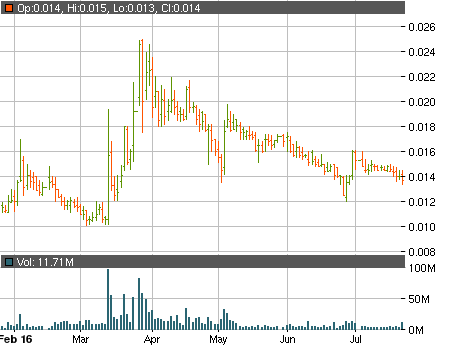 Since the start of the month the stock of Cannabis Science Inc (OTCMKTS:CBIS) has been slowly but surely sinking lower and lower down the chart. In fact, out of all the sessions in July so far the company has registered only four that ended with any gains. At the end of last week CBIS corrected by 2.14% and dropped to a close at $0.014. Will the negative sentiment change during the weekend?

Well, the red flags surround CBIS are still as serious as ever. The company is in a terrible financial state finishing the first quarter of the year with:

The numbers found on the balance can hardly justify even the current market cap of the company of $17.6 million.

The quarterly report also revealed that the shareholders of the company are still being put through a staggering amount of dilution with over 250 million shares seeing the light of day during the three months ended march 31, 2016. This brought the number of outstanding shares of the company to more than 1.83 BILLION. As we warned you in our previous article 98.5 million of those shares are free-trading and were issued through the numerous Equity Award plans of the company.

The PRs that are coming from CBIS have not been particularly successful in getting investors excited but that shouldn’t come as a surprise. After all, even the last PR that was published 5 days ago and was supposed to announce the growth guidance of the company for 2016 contained little new information and a lot of fluff. Instead of going into more detail about its business plans CBIS included as major events the numerous times it has applauded legislators and other companies working in the sector.

On July 1 CBIS announced that it will be moving its headquarters to Irvine, California, in order to be in closer proximity to its laboratory resources, key distributors, and many patients. Reaching the bottom of that same PR, however, reveals that this move will be temporary and that CBIS “is looking at Washington, DC as its next and possible final fully functional HQ”.

The stock of the company should be approached with caution and any trades should be attempted only after doing extensive due diligence.

At the start of today’s trading CBIS tried to recover some of its losses but lost momentum and is currently sitting 0.73% in the red at $0.136.