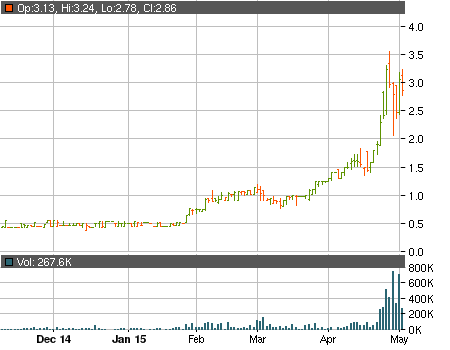 After a few exciting sessions that rocked Celsius Holdings, Inc. (OTCMKTS:CELH) in both directions on the charts, the company closed red again yesterday. Celsius stopped 6% down at $2.86 by the closing bell, on faded volume of 270 thousand shares changing hands.

A former NASDAQ-traded business, CELH delisted from the exchange voluntarily in late 2010, following non-compliance issues with shareholder capital. The company is currently trading on the pink sheet tier of the OTC Marketplace. CELH stole the spotlight and shot up into trading multiple times its old average volume after announcing a new investment deal on April 21.

The company put up PR informing of a $15.9 million investment, led by “global business icons”. That last part was not an exaggeration, as the investment was led by Mr. Russel Simmons, music and fashion mogul and founder of Def Jam Recordings. Another part of the group of investors was Chinese venture capital firm Horizons Ventures.

The deal entailed the sale of 12.9 million CELH common shares to the investor group for $0.89 per share, for proceeds of $11.5 million. The company submitted a Form D accompanying the sale of the 12.9 million shares, marking them as exempt from registration under Rule 506(d). This means the shares cannot be sold for 12 months.

Along with this offering, “certain members” of the investor group purchased a $1.5 convertible note and immediately converted it into 5 million shares, setting the conversion price at $0.30. Those 5 million shares are not specifically described as restricted in the filing detailing the deal and are not part of the $11.5 million offering under the Form D filing, as that only encompasses the 12.9 million shares mentioned above.

Additionally, a certain Altitrade Partners is still very actively covering CELH stock and singing its praises in a borderline promotional manner. The disclaimers following the research reports and coverage pieces published by Altitrade Partners disclose that Altitrade have not been paid anything for their efforts and have no agreements with CELH but “are long shares of Celsius Holding, Inc.” Altitrade’s social media accounts are still actively pumping out half a dozen CELH-related posts each day.