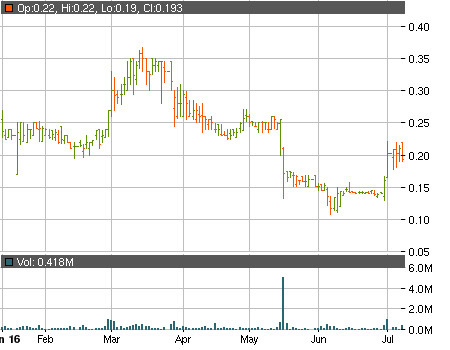 Electronic Cigarettes Intl Group Ltd (OTCMKTS:ECIG) rarely attracts a lot of investor attention and the daily volumes that it generates are rather small. The company suffered a big hit after it filed its financial report for the first quarter of the year and it did so while shares were flying left and right.

This wasn’t that surprising, considering the fact that ECIG is in a quite tough position. The company is capable of generating impressive revenues, compared to other OTC entities, but the other numbers look quite terrifying.

As you can clearly see, the company has a massive amount of liabilities on its hands, a large portion of which consists of debt financing. The recent press release from the company suggests that it will be quite a lot of time until ECIG clears its debt and it might be the reason for the drop in Friday’s session.

After a decent climb that pushed ECIG well above the 20 cent per share mark we saw the ticker lose 8.33% of its value in Friday, closing at $0.195. The volume was well above the average, but the 418 thousand shares that changed their owners managed to generate only $81 thousand in trade value at those prices.

ECIG is still slipping today, so it would be for the best if you do your due diligence and weigh out the risks before putting any money on the line.