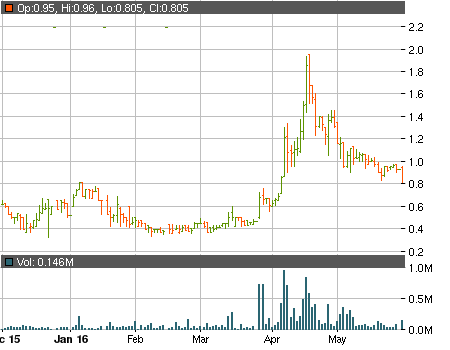 General Cannabis Corp (OTCMKTS:CANN) hasn’t been doing all that well lately. We saw the ticker make an upward run in March and April and the volumes increased, but CANN quickly turned the other way and began to slide down the charts, despite beginning to be traded less.

The company stock dropped below $1 per share early last month, but managed to return above it briefly before sliding back down and continuing its descent. The financial report for the first quarter of the year didn’t help all that much either. Here are some of the contents of the balance sheet.

The overall situation is pretty dark. The cash reserves and the current assets are way too low, while the liabilities are significant. The revenues have greatly increased compared to those of the same period last year, but the net loss has also gone up and it doesn’t look like CANN will come out at a profit anytime soon, which is bad considering the miniscule amount of capital that the company has.

This accompanied with the lack of press releases shows us why it’s not such a big surprise that CANN is losing altitude. The ticker dropped another 12.97% yesterday and closed at $0.805. A total of 146 thousand shares changed their owners and generated $123 thousand in daily dollar volume.

Today’s session shows more hesitation and it doesn’t seem like CANN will return above $1 per share anytime soon, despite the unnecessary optimism that some investors showed in the beginning of last month, which proved to be nothing more than wishful thinking.