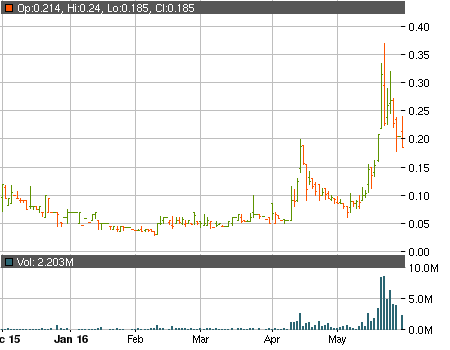 After a period of sliding we saw the stock of Innovus Pharmaceuticals Inc (OTCMKTS:INNV) begin to climb the charts in the beginning of last month and the ticker we up above the 30 cent per share mark, gaining some 350% in value over a very short period of time.

Meanwhile the volumes increased and it was certain that the company stock will correct if this keeps up. We saw INNV lose nearly 30% of its value on its highest ever volume on May 23, but the ticker showed signs of recovery in the following sessions. Unfortunately, that didn’t last long and the company stock began to slide once again.

This wasn’t surprising, considering the numbers contained in the company’s report for the first quarter of the year, which was filed on May 16 and contained the following.

Those are some pretty disappointing numbers for a pharmaceutical company. Still, INNV is at least generating revenues and its market cap isn’t as high as that of some of the other players in the industry.

The company has tried to keep the hype up and stop the stock from falling further down, but has failed to do so by now. Yesterday we saw INNV lose 9.13% of its value and close at $0.1851 while a total of 2.22 million traded shares generated $479 thousand in daily dollar volume.

Today’s session is going a bit better, but INNV is also assisted by promoters. In any case, be sure to do your due diligence and weigh out the risks before putting any money on the line.