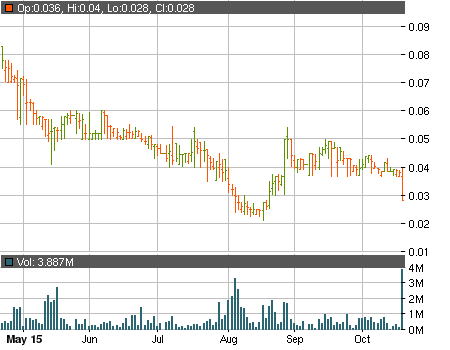 Yesterday, in a single session, the stock of Greengro Technologies Inc (OTCMKTS:GRNH) lost more than a quarter of its value. Opening at $0.0365 the ticker did move up to a high of $0.04 in early trading but for the rest of the session it moved in only one direction – down. By the time of the closing bell GRNH had fallen to $0.0281 registering a loss of 26%. Throughout the session close to 5.4 million sessions got traded while the monthly average for the stock stand at 464 thousand.

The crash was truly disastrous but there doesn’t seem to be an obvious catalyst for it. It is true that GRNH has been silent for a month now with the latest PR coming on September 22 when the company announced its line of do-it-yourself rooftop photovoltaic solar power system kits with microinverters but the lack of news could hardly cause such a massive sell-off.

The financial results of the company, although still rather underwhelming, are showing some encouraging signs. The quarterly report for the period ended June 30 revealed that back then GRNH had:

It is obvious that GRNH is far from a profitable entity, however, compared to the results for the same period last year the balance sheet looks much better. The revenues have grown by close to $40 thousand while the net loss has been reduced by nearly 60%.

The issuance of shares has also been kept in check and for the first six months of the year less than 12 million shares were printed. 8,550,000 of them were for consulting services while 3,400,000 shares were sold for cash at an average price of $0.039 per share. As of June 30 GRNH had one outstanding convertible note but with a fixed conversion price of $0.10 per share it doesn’t seem likely that it will be turned into shares at the moment.

GRNH are still a risky choice though. The limited cash reserves could force the company to take on additional debt which could cause increased dilution. The volatility of the the stock shouldn’t be underestimated either. Take your time to carefully plan your trades before putting any money on the line.