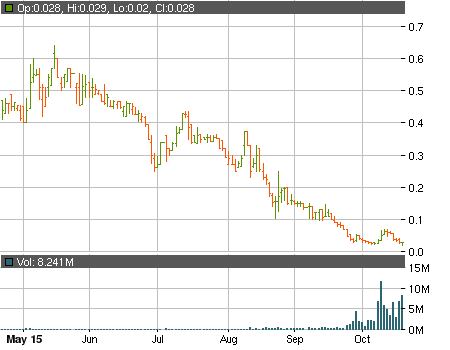 For five sessions in a row the stock Vape Holdings Inc (OTCMKTS:VAPE) slid down the chart crashing from a high of $0.0685 to a close at $0.028 on Monday. Yesterday, however, the company finally managed to stop its red streak although just barely. Opening at $0.02825 the ticker quickly found itself at an intraday low of $0.0201. Thanks to a strong rally in the last minutes of the trading day VAPE were able to climb up closing the session flat at $0.28. Is this a signal that the stock could be in for a recovery?

Investors should keep in mind that the risks surrounding the company are extremely serious. VAPE is in a dire financial state finishing the second quarter of the year with:

An even bigger problem is the crushing dilution of the common stock that has been taking place during the last couple of months. Between August 14 and September 29 5.1 million shares came into existence as a conversion of $226 thousand in convertible debt. A new 8-K from filed on October 14, and the reason for the stock’s decline, revealed that during the first 13 days of October 10.6 million fresh shares were issued this time as a conversion of just $135,270 worth of debt. As a whole the outstanding shares of the company grew from close to 12 million to nearly 30 million in just two months.

Will the dilution come to an end any time soon? Well, let’s just say that as of June 30 VAPE had $1 million in outstanding convertible notes with two additional notes for $622 thousand sold in April.

Investors might also want to take into account that according to the September 29 Schedule 13G statement 10% of the then outstanding shares were owned by Mr. John M. Fife. The same Mr. Fife was part of a SEC complaint alleging a “fraudulent scheme to purchase variable annuity contracts” and engage in “market timing”. The court ruling included the defendants Jonh M. Fife and Clarion Management paying a disgorgement of $234 thousand with Mr. Fife also fined with a civil penalty of $234 thousand.

As the recent corporate update issued by VAPE stated the company is trying to deal with some of the problems it is facing but they still have a long way to go. The current volatility of the stock could offer some opportunities for quick gains. Jumping in without doing the necessary due diligence may be quite dangerous though.