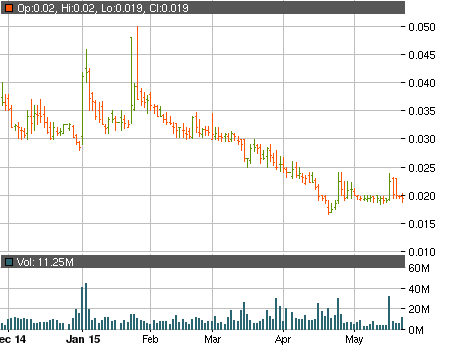 On May 18 Hemp Inc (OTCMKTS:HEMP) spiked out of the blue and registered a gain of over 18%. Unfortunately the reason why investors suddenly got so excited had nothing to do with Hemp’s own operations as it was most likely caused by the PR published by Medicall Marijuana Inc (OTSMKTS:MJNA), which lifted the whole industry for a day.

Left on its own HEMP wiped nearly all of its gains in just four sessions closing at $0.0194 last Friday. The financial report for the first quarter of 2015 that was filed on Thursday failed to have any positive effect on the stock’s performance. And how would it when the numbers it contained were nothing short of depressing. At the end of March HEMP had:

The cash reserves of the company did increase but it was achieved by HEMP shedding more of their securities held for sale – at the end of the first half of 2014 the company reported over $4.6 million in securities held for sale while now they have less than a $1.2 million. In our previous articles we often warned you that for the entire second half of last year HEMP generated less than $100 thousand in revenues but now it is obvious that things have gotten even worse.

Not only did they report exactly $6223 in revenues for the first 3 months of 2015 but in order to generate even that amount the company incurred cost of goods sold of $28 thousand. This means that HEMP finished the quarter with a gross loss of $21,784. At least the issuance of shares hasn’t been that alarming but that still leaves the company with 2.7 billion outstanding shares out of the 3 billion authorized.

In the meantime the reassembly of their Temafa decortication line is still suffering from delays. The equipment was purchased more than a year ago but is still not ready for use. A team of engineers that should help with the reassembly was first expected to arrive at HEMP’s facility by the end of April. That didn’t happen. In a PR from May 11 it was announced that the engineers would arrive in the next 5 days. Well, that didn’t happen either with HEMP announcing on May 19 that an engineer is now expected by the end of the week. We will see what the next press article will say.

Trading the stock of the company is a risky venture with the ticker sitting relatively close to its 52-week lows. Keep in mind that the reassembly of the Temafa line will still take quite a bit of time and even when it is completed only kenaf will be processed as hemp is not legalized in North Carolina.