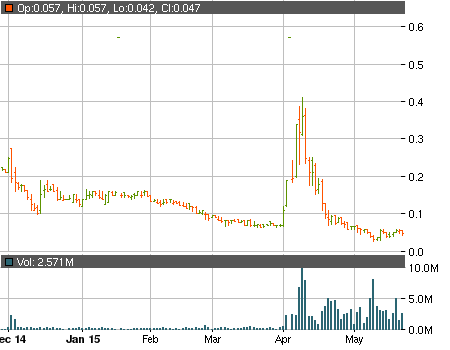 Last Tuesday the President of Windstream Technolog (OTCMKTS:WSTI) issued a letter to the shareholders. In it Mr. Dan Bates talked about WSTI’s operations around the world, the production facility in Hyderabad, India, that should be launched on June 10 and reminded the market that March was the best month in the entire history of the company.

Unfortunately the positive effect of the PR lasted for only two days and while on Thursday WSTI slipped in the red with a minor loss of less than 1% on Friday the negative momentum had once again reached alarming levels. The stock crashed hard wiping 16% of its value and closing the week at $0.047. When WSTI first announced the positive results from March it pushed their stock to highs of over 40 cents but now the company is sitting nearly 90% lower.

On May 15 WSTI filed their financial report for the first quarter of 2015 and it clearly showed why using caution is still required when approaching the stock. According to the report at the end of March the company had:

It is indeed true that the revenues for the quarter were significantly higher than the same period last year but nearly all of the other financials showed signs of deterioration. The cash reserves are nearly three times lower, the working capital deficit has surpassed $5 million while the net loss grew by $200 thousand. The accumulated deficit since inception is now approaching $23 million.

The red flags don’t stop there though. Despite the record sales during the first three months of the year the convertible notes payable of the company actually increased by around $450 thousand and reached $3.5 million at the end of March. Between December 31, 2014, and May 12, 2015, the outstanding shares increased from 88.6 million to nearly 112 million. 13.7 million of the newly issued shares came into existence through the conversion of notes at an average price of $0.031. WSTI are still taking on more convertible debt with around $200 thousand worth of new convertible notes sold in April.

The lackluster financials coupled with the truly devastating potential dilution if more notes are turned into common shares at severely discounted prices turn WSTI into a risky stock for investment. Any trades should be preceded by extensive due diligence and careful planning.