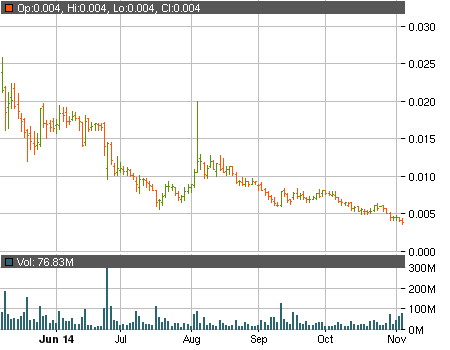 About three hours before yesterday’s closing bell, Minerco Resources Inc (OTCMKTS:MINE) announced that they have signed an agreement with a distributor in the United Kingdom. The press release says that the VitaminFIZZ is still not ready to hit the shelves across the pond, but the company promised that people in the UK will be able to buy it in the spring of 2015.

This is a massive piece of news and plenty of people are rightfully excited about it. After all, having the product sold in a new market will not only bring in additional revenues, but it will also subject the company to much more exposure. And, who knows, some investors in the UK might even be interested in pouring money in MINE. Chances are, however, that they will want to do some research first. So, what will they find?

They will see that MINE has a lot of supporters across message boards, social networks, and, as of lately, Seeking Alpha. They will also see, however, that there’s no shortage of skeptics who aren’t really convinced about the future.

It’s always good to take a look at the two sides of the coin before putting any money on the line, so let’s dig a bit further and see what MINE‘s pros and cons are.

On the positive side, if the press releases are anything to go by, the company has made some significant steps in the right direction over the last few months. The VitaminFIZZ production started in the summer and the beverage is already sold in several states. MINE recently acquired a controlling interest in a Southern California distributor which should, theoretically, help them lower the costs and give the revenues a boost. Now, the VitaminFIZZ is going oversees which, as we mentioned already, will give the company another push in the right direction.

In light of all this, the UK investors who may or may not be contemplating a potential buy order might seem impressed. They will, however, want to take a look at the chart as well and once they do, their excitement will most likely evaporate.

Despite the torrent of news and exciting new contracts, MINE‘s stock performance has been absolutely catastrophic. Back in August, the ticker was hovering around the $0.01 per share mark. Yesterday, despite the undoubtedly positive announcement, MINE lost another 7% which means that it’s currently sitting at just $0.0039 (which, in case you’re wondering, is a whopping 91% below the 52-week high logged back in April).

The UK investors are probably asking themselves at the moment: “Why is the stock performance so horrific?”.

The answer lies in the SEC filings. If the people researching the company have a closer look at them, they’ll see that during the nine months ended April 30, the company printed more than 1 billion shares in order to satisfy just over $358 thousand worth of debt. This means that the average conversion rate stands at a little over $0.0003 per share and it also means that the people who got the aforementioned stock still stand to cash in on some healthy profits.

Unfortunately, the dilution didn’t end there. According to the latest 10-Q, on June 23, the O/S count was sitting at around 2.4 billion. The company profile at the OTC Markets, however, is telling us that by September 30, it had grown to over 2.6 billion. The 10-K which will probably come out within the next week or so (the delay means that MINE‘s profile is now marked with a Limited Information stamp) should give us an idea of where it stands at the moment.

While we’re waiting for it, let’s get back to our fictional (at least for the time being) UK investors and ask: “In light of all the facts above, will they be interested in placing their buy orders?”.

We can’t be sure. One thing that we do know for certain, however, is that thinking through all the risks carefully could save you a lot of sleepless nights.