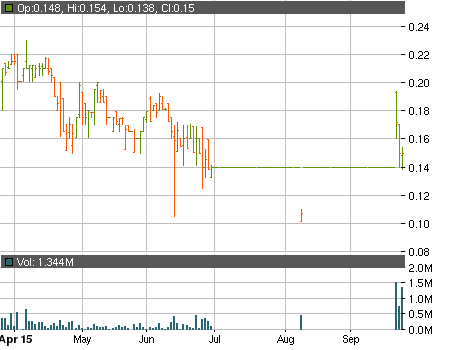 After crashing down for two sessions in a row and wiping a huge chunk of its recent gains yesterday the stock of Ominto Inc (OTCMKTS:OMNT) managed to close flat at $0.15. Is this a signal that the ticker might be reversing its direction?

OMNT is definitely not one of the typical pennystock ventures – according ot the latest financial report at the end of June they had:

While the company is still incurring heavy losses the revenues for the quarter grew by 337% when compared to the same period last year. At the same time nearly half of the reported liabilities consisted of deferred revenues.

In a PR from September 18 OMNT announced that they would be raising additional funds through a proposed offering of new shares of its common stock and warrants to purchase additional shares of common stock. The S-1 registration statement for the offering was filed on the same day. In the PR, however, another important piece of information was disclosed – OMNT will try to uplist to a national exchange and they have already submitted an application to be listed on the NASDAQ Capital Market. Although there is no guarantee that they will be successful the attempt alone was bound to generate a lot of hype around the company.

Jumping into the stock without doing sufficient due diligence may be rather dangerous though. Prior to June 26 OMNT was known as DubLi, Inc. and if you’ve been dealing with pennystocks for at least a while the name might sound familiar. DubLI found itself facing a real storm of troubles with the SEC even threatening to suspend the company if they didn’t put their filings in order. Equally as troubling is the fact that the Vice President actually obtained a restraining order in court against the CEO, Mr. Michael Hansen.

You might argue that with a new name and new management team OMNT is now an entirely different company. Well, as the 8-K filing submitted yesterday shows Mr. Hansen has been appointed as Executive Vice President of Business Development for a term of five years.

OMNT definitely have a lot going for them but the risks should not be underestimated. Do your own research and adjust your trades accordingly.