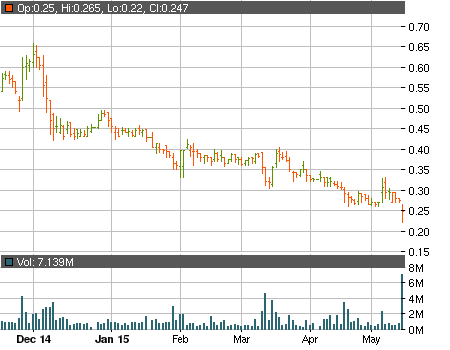 Early in the morning yesterday OncoSec Medcial Inc (OTCMKTS:ONCS) published a rather important PR announcing that  its Board of Directors has authorized a 1-for-20 reverse stock split. Without wasting any time the effective date of the split has been set to May 18. Following the split the authorized shares of ONCS will decrease from 3.2 billion to 160 million, their outstanding shares will shrink to around 12,3 million while the ticker of the company will become ONCSD for the next 20 business days.

The goal of the split is to align the share price of the company with the minimal requirements of the NASDAQ exchange as the company will try to move out of the OTC market and uplist to the national exchange. The benefits of being listed on a bigger exchange if ONCS’ plans are successful are enormous but it seems that the reverse split left investors far from ecstatic.

As a result of the news the stock of the company opened yesterday’s session with a gap down at $0.25. The ticker tried to recover but failed and closed even lower at $0.247 for a loss of over 10%. Not only that but during the session ONCS actually registered a new 52-week low of $0.22. The traded volume for the day reached the massive 7.3 million shares, the last time ONCS registered comparable volumes was nearly a year ago at the start of June 2014.

While the reverse split itself is not necessarily a bad thing and the intentions behind it are indeed encouraging investors seem to have serious doubts that ONCS will manage to hang on to its increased share price after the split takes place. And if you take a look at the chart performance of the stock they may have a point. Since December, with the exception of a couple of short-lived spikes, ONCS has been continuously dropping down the chart sliding from over $0.65 to less than 30 cents per share, and that was before yesterday’s crash.

The company has a couple of upcoming catalysts as stated by the CEO of ONCS in a Twitter post from yesterday. Investors are expecting results from the Melanoma, Head & Neck Cancer and Triple Negative Breast Cancer clinical trials. Enrollment for the Phase IIb combination study that is going to evaluate the safety, tolerability and efficacy of OncoSec’s ImmunoPulse IL-12 when used in combination with Merck’s KEYTRUDA (pembrolizumab) should also begin in the near future. If this will be enough to keep ONCS at its new price ranges only time will tell.