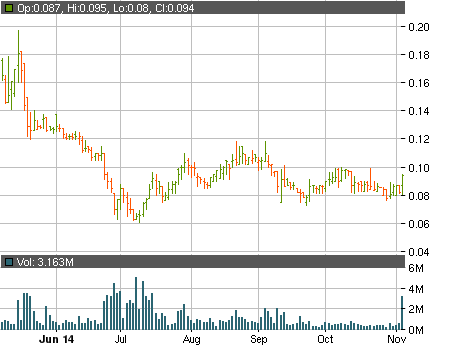 After nearly a month of silence yesterday Stevia Corp. (OTCMKTS:STEV) pusblished a new PR article. In it they shared their expectations that the 2015 spring harvest will surpass the 2014 one and will reach record amounts. Furthermore the company reminded the market about their hemp subsidiary – Real Hemp LLC. Apparently their plans are to start commercializing CBD –based intellectual property and products at some point next year.

Although the PR talked about events in the future it proved to be exactly what investors wanted to see. During yesterday’s session more 3.1 million shares changed hands resulting a gain of nearly 15%. For comparison the average volume for the company is nearly six times lower at 521 thousand. STEV closed the session at $0.094 just short of the intraday high of $0.095.

Unlike the majority of OTC companies that decided to jump on the marijuana bandwagon earlier this year STEV is not relying solely on hype to attract investors. The company has stable operations outside of the cannabis industry and for the second quarter of the year they reported the following results:

With respectable cash reserves and positive working capital the company is in a rather solid financial state. They were even able to finish the period with a positive balance sheet, a rare sight in the world of pennystocks.

There is one huge red flag though – the massive dilution that has been taking place. At the end of March, 2013, STEV had 63.5 million outstanding shares. 12 months later at the end of March, this year, that number had more than doubled and now there were 149 million shares. Less than five months after that, as of August 15, the outstanding shares had reached 192 million and are getting dangerously close to the 250 million authorized shares. If you take a look at the latest S-1 statement you will see that back in August STEV registered nearly 48 million shares.

The effects of the continued dilution are still influencing the movement of the stock. The company will need to continue expanding their operations while not resorting to new convertible debt. For now though STEV should be approached with caution. Investors could be tempted to start taking profits after yesterday’s jump.

Currently the stock is sitting 3% in the green after a hectic start of the session.