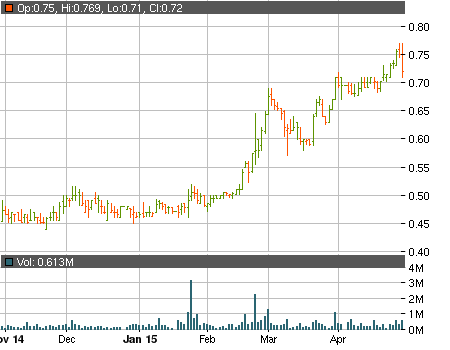 This week the stock of Titan Pharmaceuticals, Inc (OTCMKTS:TTNP) reached its highest trading price for the last eight months. It seems that such prices may be a bit too much for the stock to handle. For the past two sessions the ticker has been showing signs of hesitation and while Tuesday’s trading ended with the company sitting less than 1% in the red yesterday the correction was a bit more severe – TTNP lost 4% and closed at $0.719. Will the pullback continue though?

The company is far from the typical biopharmaceutical pennystock. Their lead product Probuphine is actually in a Phase III study. The enrollment of patients for the trial was completed back in November 2014 and results are expected by the end of the second quarter of 2015. Following the successful completion of the study TTNP plan to resubmit the New Drug Application (NDA) for the Probuphine in the second half of the year. The company is also in the early stages of a development program using their ProNeura technology for the treatment of Parkinson’s Disease.

The financials state of the company further puts them apart from the rest of the biotech pennystocks. According to the annual report for 2014 that was filed at the end of March TTNP finished last year with:

Although some of the financial indicators deteriorated when compared to the results for 2013 as a whole Titan are in stable position for now. In fact the company projects that its current cash reserves will be sufficient to carry their operations through the fourth quarter of 2016.

There are some things that investors should keep in mind. The majority of TTNP’s cash came through a public offering of 21 million units that took place last October. Each unit was priced at $0.50 and consisted of one common share and 0.75 of a warrant with a full warrant having an exercise price of $0.60. The problem is that if the people who received these warrants decide to exercise them the company won’t have enough room to issue all of the required shares. As of March 24 TTNP had 110 million outstanding shares out of the 125 million authorized.

In February the company amended the terms of the warrants and the shareholder meeting that was initially supposed to be held by the end of March was postponed to August 31. During the meeting a vote will be held on either an increase of the authorized amount of shares or the implementation of a reverse stock split.

TTNP may lack some of the more glaring red flags associated with trading pennystock companies but that doesn’t mean you should approach them without doing your own due diligence. The stock is still sitting relatively high and investors could continue taking profits for a while.