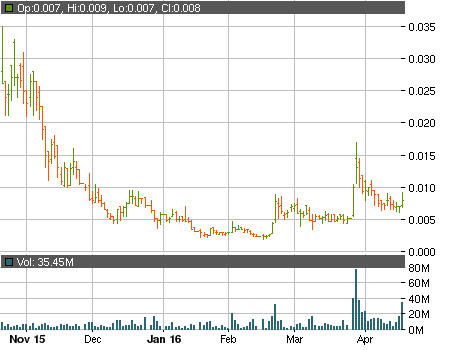 Yesterday Vape Holdings, Inc. (OTCMKTS:VAPE) announced entering into an equity line for up to $5 million in funds over the next three years with its current financing partner, GHS Investments, LLC. The terms of the deal allow VAPE to sell equity at its discretion and more importantly without any discounts.

The company definitely needed to find a new source of capital – the latest financial report filed by VAPE showed that as of December 31, 2015, its financial state was rather grim:

The news about the equity line appears to have reinvigorated investors and after closing flat for two sessions in a row yesterday VAPE‘s stock surged by more than 14%, closing at $0.008 per share. The sheer number of traded shares also enjoyed a nice boosts with investors shifting more than twice the monthly average for the company. The excitement caused by the financing deal was also able to offset the latest round of extremely cheap shares issued by VAPE as a conversion of debt.

At the end of September 30, 2015, the outstanding shares of the company were sitting at just below 20 million. Since then, however, VAPE‘s shareholders have been suffering through agonizing levels of dilution. In just three months, as of December 31, 2015, the O/S of the company had ballooned to 183 million while as of February 22, 2016, it had surpassed 213 million shares.

The incessant dilution and the fact that such a vast amount of underpriced shares can be unleashed on the open market at any moment could continue to influence the movement of the stock. That is why putting any amount of money into VAPE should be preceded by careful planning and sufficient research.