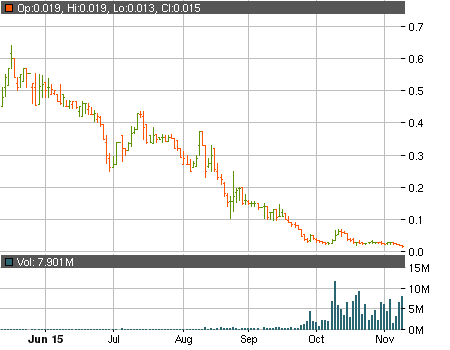 So far the stock of VAPE HOLDINGS INC (OTCMKTS:VAPE) has registered four consecutive sessions of losses and it seems that the downtrend is getting even stronger. Yesterday the company crashed by more 21% and finished the day at $0.015 per share. A new 52-week low of $0.0131 was registered during the trading day.

VAPE‘s chart performance has been nothing short of depressing with the company starting 2015 at more than 80 cents while currently it is hurtling towards the 1 cent per share mark. The stock’s depreciation has gotten especially painful in the past few months – at the end of July the company was still sitting at more than 30 cents.

If you are wondering what could possibly cause such a staggering drop, well, you don’t have to dig deeper. VAPE have been diligent enough to regularly file new 8-K forms detailing the dilution of their common stock. Let’s just say that between August 14 and October 29 the outstanding shares ballooned from 11.9 million to more than 53 million. Nearly all of the issued shares came into existence as a conversion of approximately $561 thousand in debt.

The dilution might continue for a lot longer though. At the end of the second quarter of the year VAPE reported $1 million in outstanding convertible notes. In August the company sold two more notes totaling $622 thousand.

The results from VAPE‘s operations simply cannot offset such a rampant issuance of underpriced shares. According to the latest financial report at the end of June the company had:

The fiscal year of the company ends at the end of September which means that the annual report won’t be coming for another month and a half. Without any way of knowing how much notes could still be turned into common shares VAPE will remain an extremely dangerous choice. Approach the ticker with caution and only after doing your own due diligence.